This image was received on 35mm Polaroid film without the use of a camera. This experiment was witnessed by members of the Society for Psychical Research.
​The session of 16 March 1996 was an experiment which produced one of the most interesting, challenging - and ultimately evidential - photographic films of all. The information on the film, although cryptic, was soon considered to be very relevant to Frederick Myers.
​After processing, there were a number of images along the length of the film. On the extreme left was a single Greek word: Diotima.

This was followed by a sentence in French: ‘Ce n'est que le premier pas qui coute’. (It is but the first step that counts).
Then came the following stanza, written in script across four long lines:

That hour may come when Earth no more can keep,
Tireless her yearlong voyage thro' the deep;
Nay, when all planets, sucked and swept in one,
Feed their rekindled solitary sun;

Nay, when all suns that shine, together hurled,
Crash in one infinite and lifeless world;
Yet hold thou still, what worlds soe'er may roll,
Naught bear they with them master of the soul;

In all the eternal whirl, the cosmic stir,
All the eternal is akin to her;
She shall endure, and quicken, and live at last,
When all save souls has perished in the past.
The next message consisted of Greek letters.​..

The SPR investigators reported their interpretation of this as follows... 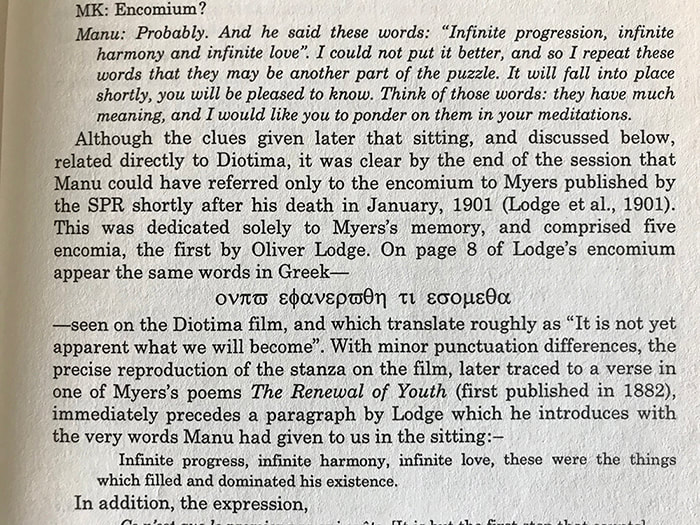 The Possible Significance of the 'Diotima' Film Clues
On the Diotima film were found references to an encomium to Myers, published by the Society for Psychical Research, shortly after his death in January 1901. Diotima itself proved to be the crucial word since it was the first word on the film and was also a 'test word' given in one of the early cross-correspondences, with which the spirit of Myers gave every appearance of being closely involved. Having linked the film to Myers, the Spirit Team then seemed to be linking both Myers and the film to the cross-correspondences.

This was fascinating for a number of reasons, not least of which was that the cross-correspondences were an earlier attempt to prove survival by defeating the anti-survival hypotheses (namely, fraud, alter ego and super-PSI) precisely what the Scole Experiment was trying to achieve.

​The reason for clues linking Myers, the Diotima film and the cross-correspondences seemed to be using the circumstances of one man's life on Earth to construct a series of clues to a puzzle, the solving of which would show that a sentient, surviving personality was involved in the transmission of the messages on the film. It was certainly intriguing to the S.P.R. that Myers might be trying to contact them through the new opportunity afforded by the Scole Experiment.

There are other messages transmitted via films (Wordsworth) which, once again, appeared to point to Myers as a common link.
​At the end of the film there were two names. The first was difficult to decipher, especially since it was in mirror-image. It was later found to be 'Cora L.V.Tappan' (who is deceased and was a medium). He name was written backwards under the Greek letters. The second name was written more clearly and appeared to be 'Will Rallings' but no significance has yet been found for this name.